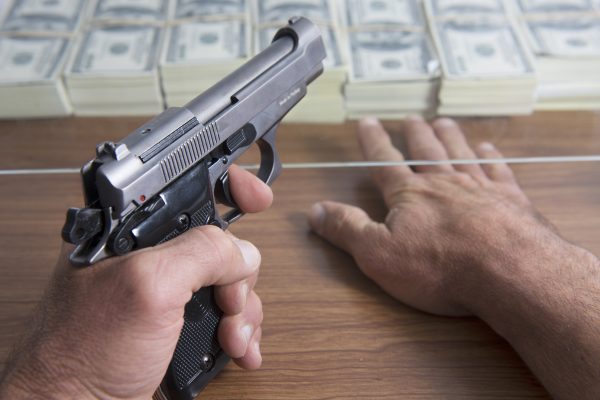 When Joe Bruton, 42, robbed the First Bank of Huntsville with a variety of drugs and alcohol coursing through his veins, he was unarmed and wore a hooded  sweatshirt to conceal his identity.

The fact that he was loaded was the usual. Drugs are implicated in 80 percent of the crimes committed. They gave him courage but also impaired his thinking.

On that rainy March day in 2005, he walked up to one of the windows, told the teller he wanted to take out a loan and when advised that he would have to fill out a form he said he wasn’t talking about that kind of loan. He was talking about the kind where she would give him cash, and he would maybe repay it later.

After hearing his threat that he would jump over the counter and grab the money, the teller handed him two stacks of twenties adding up to about $2,000, and he left after giving the security camera a cursory glance. It was a costly mistake.

Bruton’s intent was to get his car back from the repo man and rescue his wife and three children who had finally been rendered homeless by the addictions that had plagued him from the time he was a teenager.

Instead, after getting his car, Bruton spent the rest of the money on drugs and, in a bizarre twist, began planning a ski vacation for himself in Colorado. It never happened. He was arrested at the Salvation Army in Fayetteville for the robbery and, later, an added charge of drug manufacturing.

Authorities took him to the Washington County Jail in northwest Arkansas where they put him in a “rubber room” to detox. Fearing he would die getting off of the huge amounts of drugs in his system, which included 50 or more pain pills, Bruton begged to be sent to a hospital, but his request was denied. It seemed likely that if he lived through detox he would spend the next 40 years of his life in prison.

As it turned out, “God had something else in mind,” as Joe put it to 118 inmates gathered on a sunny April afternoon in the gymnasium at Tucker prison. Joe and 15 other inmates had successfully completed a two-year program, Chuck Colson’s Christian-based Innerchange Freedom Initiative (IFI), which focuses on developing life skills and biblical values.

IFI, which has morphed into Pathways to Freedom, is one of a few programs that are really effective in prisons, and we need more. One out of 100 American citizens is in prison today and when they finish their time and are released 80 percent of them commit another crime and end up back in prison.

Bruton had been released six months early and had come back to speak to his IFI classmates whose crimes ran the gamut of writing hot checks and drug dealing to homicide and who were in various stages of completing the program.

Inmates in the IFI program, at that time, rose early, attended morning and evening classes, had jobs at the complex, and during the evening hours they read, wrote letters, played board games and studied for tests. They watched no television and were separated from the rest of the prison population except for meals. They were not kept in cells but rather bunked together in a large dormitory room.

Inmates, who learned to live by six core values, “integrity, responsibility, productivity, affirmation, community and restoration,” had to meet four conditions after release. They had to have regular meetings with their mentors, who meet them at the gate upon their release. They also had to keep a job, attend a church or other house of faith and be active in another social group.

Bruton’s return to society, he says, was textbook perfect by IFI standards.

For one thing, he knew he would have a place to live. When Bruton went to prison, Janie and the children were left homeless, and she went to live with her sister. But soon she got a job at Wal-Mart’s optical and with help was able to buy a small house.

When Bruton was in IFI, he asked for and received forgiveness from his wife and children. He knew when he got out of prison, he would have a place to live.

When he left Tucker, Bruton’s mentor met him at the gate and led him through the re-entry process.

“My guy picked me up at the gate,” Bruton says, “took me around to settle unresolved misdemeanor charges—parking tickets and other minor offenses I had accumulated during my drinking and drugging—helped me get my drivers license back and took me to check in with my parole officer. Janie didn’t even have to take off from work.”

He also helped Bruton get a $9 an hour job on the night shift line at George’s Chicken plant in Fayetteville. And he drove Bruton to a car dealer where he bought himself a Dodge Neon for $1,500 to drive to work in.

He also found and joined the Inside Out Church in Fayetteville, and its Pastor, Jim Muse, and the entire congregation has helped him. He also has a 12-step program sponsor.

“The usual prison routine, when an inmate gets out,” Bruton said, “is to give the guy $100 and a bus ticket, and he’s on his own.” And, as often turns out, vulnerable to the nearest drug dealer, who will start him on the path back to prison. National statistics show that as many as three out of four inmates go back to prison within three years for missing parole or committing another crime.

After two years with George’s, Joe joined Goodwill industries of Arkansas where he began by developing a re-entry program for ex-prisoners modeled after his own experience with the Prison Fellowship program.

As part of our mission to help as many people as possible overcome their addictions please accept a free copy of David's book as our gift to you! To receive your free gift please submit the form below.  You will receive a download link in your … END_OF_DOCUMENT_TOKEN_TO_BE_REPLACED

As part of our mission to help as many people as possible overcome their addictions please accept a free copy of David's book as our gift to you! To receive your free gift please submit the form below.  You will receive a download link in your … END_OF_DOCUMENT_TOKEN_TO_BE_REPLACED