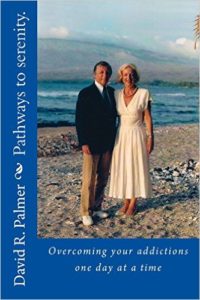 Author David Palmer’s “Pathways to Serenity” is about people who have experienced the blessings and joy of recovery from their addictions, how they did it, and how you can do it. Its purpose is to give you hope and encouragement.

In the book’s 19 chapters you will gain a new understanding of resources like psychiatric evaluations and treatment, 12 step programs like Alcoholics Anonymous and Al-Anon and Christ-centered programs like Celebrate Recovery.

A key to recovery, Palmer says, is to “take life in small bites. There will be moments of serenity, but not every moment. And that’s where the ‘one day at a time’ comes in.”

David’s recovery began in Boulder, Colorado in 1979, and when he moved to Little Rock a year later he and his wife, Joan, joined Fellowship Bible Church. David, strongly influenced by pastors Robert Lewis, Bill Parkinson and Bill Wellons, became a Christian.

GET YOUR FREE COPY

Robert, who played a significant role in my recovery and the restoration of my marriage, founded the international Men’s Fraternity in 1990 and is the author of a number of books about marriage and families and the entrepreneurial role of churches in America.

I sent him a copy of Pathways to Serenity, and he responded as follows:

“David. Thank you so much for sending me a copy of your book.  I’m honored!!  And looking through it, it looks outstanding. I so appreciate how you have labored and served and persevered through the years in helping others find new freedom and a new life.  Bless you brother!  I know God delights in you and your work.” Robert Lewis

And From the Clarion Review:

“Palmer emphasizes repeatedly how it is possible to change ingrained habits, pick up the pieces, and strive toward a quality of life few could have imagined possible in their darkest moments.”

“While maintaining a gripping intensity in his narratives, he neither sensationalizes nor patronizes and is successful in providing well rounded, relatable portrayals that are realistic and compelling.”

GET YOUR FREE COPY

Editor’s note: Pathways to Serenity, published in 2013, contains a brief report on the faith-based Principles and Applications for Life (PAL program) founded by Chaplain Kenneth Dewitt at Newport, Arkansas’s McPherson prison for women and the Prison to Purpose (P2P) program founded by former inmate, Stacy Smith. Both programs had merit but both founders proved to be flawed and the programs were terminated. It is possible that the content of the programs, which is considered by some to be valid, could be revived under new leadership.

In December 2015, Dewitt was charged by the U.S. Just Department with 50 counts of third degree sexual assault, related to the abuse of three female inmates at McPherson. He pleaded guilty to the charges in July of 2016, and received a 5 year sentence. He is currently incarcerated at Cummins Penitentiary in Grady, Arkansas and became eligible for parole in June 2017.

Stacey Smith, who was first arrested with five kilo’s of cocaine in May, 1993, was given a 60 year sentence. She met Dewitt when she was transferred to McPherson in 1998 and, with his guidance, formed her own ministry, Prison to purpose (P2P). The program was set up to make the PAL program available to felons when they were released and also to church leaders and their congregations. The P2P program was also terminated.

As part of our mission to help as many people as possible overcome their addictions please accept a free copy of David's book as our gift to you! To receive your free gift please submit the form below.  You will receive a download link in your … END_OF_DOCUMENT_TOKEN_TO_BE_REPLACED

As part of our mission to help as many people as possible overcome their addictions please accept a free copy of David's book as our gift to you! To receive your free gift please submit the form below.  You will receive a download link in your … END_OF_DOCUMENT_TOKEN_TO_BE_REPLACED