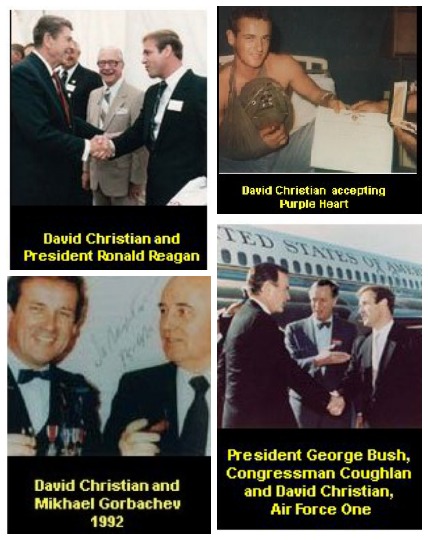 “In my childhood the only exotic, exciting, beautiful things that my mother shared with me were her military times. She was a WAC, and she met my father in the Philippines. She told me about the South Pacific, about serving with MacArthur, about New Guinea and Australia.”

So begins a short article Army Captain David Christian dictated to writer Margot Achtereerg in 1981, more than 30 years ago.

Captain Christian, at that time, had been named the most highly decorated veteran of the Vietnam War.

“Before the war I didn’t think of the military as a machine for killing people,” Christian said to Achtereerg, “I thought of it as something romantic, the kind of romanticism that poets have attached to war in the past.

“When I was in high school, they put on South Pacific. Things like that were my perception of the military. My mother raised me alone. My father was an alcoholic. One day he took the lawn mower to be fixed and never came back. I always wondered whether he got it fixed.

“I was brought up on welfare and hand-me-down clothes. When I was 17, I joined the Army, mainly for the GI Bill.”

You can read more of Christian’s account on his web site, DavidChristian.com, or buy his book, “Victor Six. The Saga of America’s youngest, most decorated officer in Vietnam,” published by McGraw Hill and also available on Amazon. So let me summarize and then tell you about a collaboration we at One Day at a Time (ODAT) have formed with Christian.

After enlisting in the Army in 1965, Christian was quickly promoted to Sergeant and admitted to Officers Candidate School. He was commissioned when he was eighteen. After that it was Army Airborne School (Jump School) and then Army Special Forces (Green Berets) training. He was promoted to Captain when he was 20.

Christian was critically burned by napalm in Vietnam in 1969 and sustained multiple other wounds. He was first treated in Vietnam hospitals and then transferred to the 106 General Hospital (a division of the Brooke Burn Center in Texas) in Japan. He was medically retired from the Army at age 21. During his four years of active duty service he compiled a remarkable record.

Following a period of convalescence, Christian went back to school and graduated on the Deans List at Villanova, earned his law degree at Rutgers and attended graduate programs at Villanova, University of Pennsylvania, Bryn Mawr College and Middlebury.

Christian became a strong advocate for veterans when he mustered out. He was a founding vice president of the Council of Vietnam Veterans and served the Reagan administration in the Department of Labor-Veterans Employment.

A Republican, Christian, now 65, twice ran for a seat in the U.S. House of Representatives in the early 1980’s and was defeated. He is also a former Fox News military analyst and has traveled extensively on Defense Department matters, most recently in the Middle East with U.S. Department of Defense chief, John Kerry, who is a fellow Vietnam War veteran.

Christian is a neighbor of my son, Michael, an ODAT board member who lives in Bucks County Pennsylvania. He has taken an interest in Michael’s 24-year-old son, Rees, who has struggled with emotional and substance abuse problems since his early teens and came close to death in two accidents, and wants to help him.

Dave and I talked about it during a long conversation at a Bucks County coffee house in late fall and also about our mutual interest in helping combat veterans recover from their wounds, both physical and emotional.

My own service as a naval officer attached to NATO headquarters in Izmir, Turkey in the 1950’s was entirely uneventful, but later in life, beginning in my thirties my struggle with alcohol nearly killed me.

I quit drinking in 1979, became an active member of a 12-Step program, nourished my strong Christian faith and 25 years later founded One Day at a Time (ODAT) to promote recovery, especially in the veteran, teenage and prison inmate populations. Addiction rates are higher than normal in these categories.

ODAT’s mission is to reduce alcohol and drug abuse by promoting awareness, prevention, and treatment availability in these populations.

Five years ago, Christian’s combat disabilities began to give him more difficulty, and he turned to the Veterans Administration for help. During his rehabilitation, he made it a mission to provide employment-training opportunities for the severely handicapped, similar to what he got, to help them compete for jobs.

With this in mind he formed a company, PIVOT, to provide education and vocational and rehabilitation training to severely handicapped wounded warriors and others.

Recognizing that substance abuse is high in this population and a barrier to effective training, Christian suggested a PIVOT/ODAT collaboration to more effectively deal with the problem of rehabilitation.

We at ODAT, a 501(c) 3 company, are especially proud to join with Christian in his efforts to help veterans heal their wounds, restore their families and find jobs.

It is an objective we find compatible with our own mission to reduce alcohol and drug abuse by promoting awareness, prevention, and treatment availability in the following ways:

In this effort, we are guided by our vision of a nation whose citizens come to recognize substance abuse as a major health problem and seek to eradicate the associated heartache of broken families, broken dreams, and broken lives through a message of hope and recovery.

Recognizing the challenges that severely disabled individuals are meeting in finding secure careers, Christian put together a team to develop a business to provide the resources for disabled veterans and to achieve long-term competitive employment through guidance, education and training.

He called the company PIVOT and its mission is to develop employment training/education programs consistent with the US codes and regulations. In this effort he is teamed with Salto a manufacturer of High Security Electronic Locking Systems.

Salto is a company that has worked closely with training severely handicapped individuals and PIVOT will provide training in production, accounting, marketing and management skills.

Christian ended his interview with writer Acheteerg 30 years ago with the following words, “How would you like to be 35 years old, a former captain and a Green Beret, and have somebody tell you that the only job you were qualified for was to be a short order cook at the Colorado State Zoo? That’s what they told a buddy of mine.

“They said he had no meaningful training. What should he do? Go work in other wars? I came out of the war with a respect for life. I don’t have any guns in my house, and I hope never to go out with a rifle again.

As part of our mission to help as many people as possible overcome their addictions please accept a free copy of David's book as our gift to you! To receive your free gift please submit the form below.  You will receive a download link in your … END_OF_DOCUMENT_TOKEN_TO_BE_REPLACED

As part of our mission to help as many people as possible overcome their addictions please accept a free copy of David's book as our gift to you! To receive your free gift please submit the form below.  You will receive a download link in your … END_OF_DOCUMENT_TOKEN_TO_BE_REPLACED